“Chinchorro’s main feature is the plenty of wrecks on its east side, the windward one.   In fact, the Mexican government has declared the bank a marine archaeological sanctuary.   The amount of wrecks varies according to the source, from 40 to a hundred.   The count would include a German submarine and several sunken treasures.” –ww.maradentrodiving.com

“A local legend even rumors that a German submarine sank here during World War II, although no traces have ever been found of it.   Diving Chinchorro’s wrecks is an unforgettable experience.”-www.royalresortsnews.com

“The story often surfaces that this or that U-boat had mercury ballast (as much as 200 tons). They upshot would be that using Mercury would enable the engineers to stabilize the boat in an instant. Mercury is an extremely expensive metal and the cost to ballast one U-boat would be more than to construct 5 new ones. It was thus never used to ballast any U-boat.” –www.uboat.net/special/myths

Is there a sunken U-boat, or German submarine, on Banco Chinchorro, slowly leaking its ballast of mercury onto the seafloor?   No.   There is no sunken submarine at Chinchorro.  No German, American, Russian, Chinese, or even Tibetan sub there for that matter.   Then why do so many folks swear it is true?   Their dad, (or uncle, friend, cousin, etc.) told them so.   Or, they heard it from a friend, who had a friend, who had a friend who saw it.   One telling fact is that in all these years, no photographs have ever been taken of the wrecked sub, and given the shallow depths of Chinchorro Bank, a sunken German submarine would make a very photogenic subject.   But, the truth is, if any diver found a small pool of mercury lying on the bottom in some pocket of the reef, the origin of that liquid metal is much more easier to explain that inventing a phantom submarine; it is from a cargo ship carrying the mercury from Europe to the New World to be used in refining gold from gold ore, in a process known as “amalgamation.” 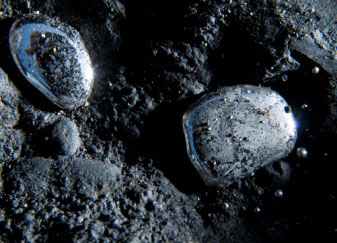 Over the centuries, many of these cargo ships sank before they could off-load their cargo of mercury.   As mercury is insoluble in water, every last drop lost from one of the wrecks is still as intact as it was the day the ship went down; shimmering, heavy, and poisonous, nestled in cracks on the bottom of the sea.   Many such sunken cargo ships have been found over the years and often their cargo of mercury has been salvaged and sold.   Currently mercury sells for about 50 dollars a pound, so it’s a lucrative endeavor. 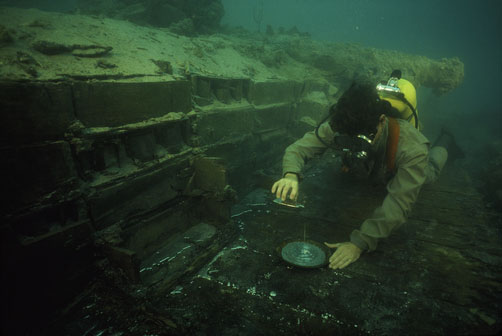 Many other early shipwrecks went down with much smaller amounts of medicinal mercury aboard.   In the 15th and 16th centuries, a syringe-load of mercury pumped up the penis of a man infected by syphilis was thought to combat the disease.   Almost all doctors aboard ships at that time carried both the mercury and the syringe to administer it, as syphilis was apparently common among sailors.   Below is an example of one of those 5-inch-long, penis-syringes from the 1600s.

As late as 1918, mercury was still employed in the fight against this venereal disease.   Sometimes it was used to rub directly onto the penis by a “trained rubber,” or a physician.   Other times it was injected directly into the flesh or inserted up the rectum as a suppository.   In the Practitioner’s Encyclopaedia of Medical Treatment published by Oxford Medical Publications in 1915, the following description was included to explain how the mercury should be prepared:

“The best method of prescribing mercury is in the form of unctions, but these are useless, except in congenital syphilis, unless carried out by a trained rubber. Mercurial unctions are messy, and cause the patient some inconvenience, owing to the time they take up. More convenient are mercurial injections. The insoluble preparations are more efficacious than the soluble. The strongest compound is the subchloride, but unfortunately its use is so frequently accompanied by pain and occasional abscess formation that some preparation of metallic mercury is better. The best painless Grey Oil is the following (Captain Adam’s formula): Hydrarg. 20 parts, Anhydrous Lanoline 30 parts, Chlorbutol 2 parts aa by Weight, Liq. Paraffin to 100 by measure, 5 minims = 1 gr. Hg. Sig. Inject. 5-10 minims weekly. Injections can be made either into the buttocks or scapular muscles.
When a patient cannot get regular medical attendance, mercury should be taken internally in some form; if this method causes depression or sets up gastro-enteritis or diarrhea, a suppository of 1 gr. of mercury salicylate in Oleum Theobromi 1/2 gr. inserted every night just before going to bed will often meet the difficulty. For use in the tropics suppositories will require to be made up with an extra amount of wax.”