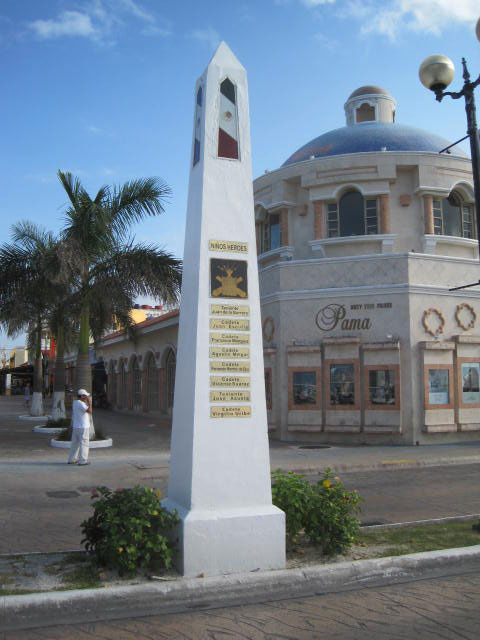 The monolith in middle of the esplanade on the malecon across from Pama honors Mexico’s six Niños Heroés (child heroes) who, as young cadets, died defending the Chapultepec Castle military college in Mexico City against the American forces during the Mexican-American War in 1847.

The six cadets were part of the group of over 400 defenders (composed of a group of cadets and members of the military college’s faculty totaling 100 and another 300 Mexican Army regulars under the command of Lieutenant Colonel Felipe Xicoténcatl) who General Nicolás Bravo had assigned to hold the castle while General Antonio Lopéz de Santa Anna regrouped and prepared to defend Mexico City.   When the Americans began bombarding the castle in preparation for the attack, General Bravo ordered a retreat, but six cadets refused to abandon their posts. The six were teniente (lieutenant) Juan de la Barrera (age 19) and cadets Agustín Melgar (age between 15 and 19), Juan Escutia (between 15 and 19), Vicente Suárez (14), Francisco Márquez (13) and Fernando Montes de Oca (between 15 and 19).   According to legend, Juan Escutia wrapped himself in the Mexican flag and jumped off the castle wall to prevent the flag from falling into enemy hands.   The date the boy heroes died, September 13, is a Mexican National Holiday.

The US Marine detachment that participated in the battle sustained such a high casualty rate during the fight that afterwards, the buff-colored stripe that adorned the side of the Marine’s dress uniform trouser leg’s was ordered changed to a red stripe and is now known as the “Blood Stripe.” The Marines also memorialize this battle in the opening line (“From the halls of Montezuma…”) of their official hymn.   American officers who participated in the battle and later became famous were Robert E. Lee, Winfield Scott, George Pickett (famous for “Pickett’s Charge” at Five Forks during the US Civil War), and Ulysses S. Grant.