The Yucatan peninsula is a karstic terrain (meaning partially-dissolved carbonate bedrock) made up of marine calcareous sediments (limestone) lain down during the Jurassic period between 200 and 145 million years ago.   The peninsula is a tectonically stable platform whose current form was created by plates and faults during the early Cenozoic epoch.

Cozumel Island is the emergent surface of a horst block (a table of land pushed upward between two normal fault lines) capped by 122,000 year old Pleistocene limestone deposited over older Miocene and Pliocene bedrock.  The limestone of the island’s surface was laid down during two different periods of submergence during the Pleistocene.   Two older Pleistocene, ten late Pleistocene and one Holocene shallow-water depositional layers are present.

The two older Pleistocene layers are made up of the remnants of patch reefs and sandy banks.   The younger late Pleistocene layers are remnants of reefs, reef passes, and a seagrass-stabilized backreef, oolite shoal, storm channel, beach and dune environment.   Beachrock deposited during the Holocene is also found on the island.   No movement of the island relative to the mainland has occurred in the past 125,000 years.

PEDOLOGY
The thin covering of soil on the island is mainly rendzina, or humus rich soil made up of weathered limestone.   The name originates from a Polish colloquial word “rzędzić,” which means “to chat:” the soil of this type contains a significant amount of gravel and stones, which, during plowing, produce various sound effects (clicking, screeching, etc.), i.e., “talk” to the ploughman.   Areas near the beaches on Cozumel are mostly regolsol, or a weakly developed mineral soil made up of unconsolidated material, in this case eroded calcareous sandstone.   Layers of sascap, (unconsolidated rock, or aragonite that never crystalized into calcite) can be found interspersed between layers of bedrock and are often exposed in open quarries.

HYDROLOGY
Because of the many pores, cracks, faults, cavities, and caverns in the limestone bedrock and the high porosity of the surface of Cozumel, rain water quickly percolates down to underground aquifers before having a chance to form surface streams, rivers or lakes. 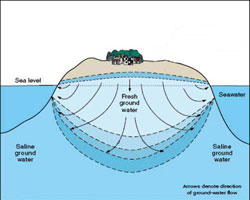 When the percolation of water down through the bedrock erodes the surface enough to cause it to collapse into the underlying karstic caverns, it forms a sinkhole, or cenote, a word from Yucatec Maya dzonot or ts’onot, meaning “well.” Many of the cenotes in Cozumel are connected together via an underground anchialine cave system (a system that connects the freshwater terrestrial cave system with a saltwater marine cave system) that has been mapped sufficiently to show that it is the fifth largest such system in the world.