A few years after the War of the Castes had gotten underway in Yucatan, a new religious cult sprang up among the rebel ranks; el Culto de la Cruz Parlante (the Cult of the Talking Cross).   The members of this cult were called the Cruzoob, the Spanish word for “cross” pluralized by the Mayan suffix oob.   The origins of the cult can be traced back to the Mayan “talking idols,” one of which had been located on Cozumel when the Spanish arrived in 1517; the temple of Ixchel in San Gervasio, which contained the “talking idol” described by Francisco López de Gómara in 1552.   The interior of the temple had a small room in the back where the statue of the goddess Ixchel stood.   Gómara stated it was a room “…where they kept a very strange idol, very distinct from the others. The body of this great idol was hollow, made of baked clay and fastened to the wall with mortar, in back of which was something like a sacristy, where the priests had a small secret door cut into the side of the idol, into which one of them would enter, and from it speak to and answer those who came to worship and beg favors. With this trickery, simple men were made to believe whatever the god told them.”

The Culto de la Cruz Parlante began on October 15, 1850, when a wooden cross dressed with a huipile was erected next to a cenote near today’s town of Felipe Carrillo Puerto.   Standing alongside, a Mayan rebel ventriloquist would throw his voice, making it appear as if his words were coming from the cross.  The cross told the rebels that they had suffered enough and now they had been chosen by God to be his chosen people.   Many Mayan rebels fell hard for the ruse and soon a new town was established around the cross, Xbalam Na Kampocolche Chan Santa Cruz.   A new military theocracy sprang up within the rebel cross-worshipers as well, headed by the priests who interpreted the messages of the ventriloquist.   Later, the ventriloquist was replaced by a high priest, who presented God’s wishes to the Cruzoob in written form. Soon, other centers of Cruz Parlante worship sprang up, in villages like Muyil, Xpalma, Chumpón, San Antonio Muyil (near Caleta Chacalal), and Tulum.

In Tulum, the high priestess of the cult (who was known as La Santa Patrona) was María Uicab, a charismatic and powerful woman who had left a string of husbands in her wake.   By 1870, María had converted Tulum into the center of the cult’s operations, displacing Chan Santa Cruz as the most important rebel-held village in Yucatan.   Sometime during her reign over the walled city, a Spanish missionary came by boat to call on the priestess.   He was killed, the flesh removed from his skeleton and his bones set in cement in Tulum as a symbol of the power the Cruz Parlante had over the religions of the Spaniards.   In 1978, I visited Tulum and took this photo of what remained of the bones, which have since been removed. 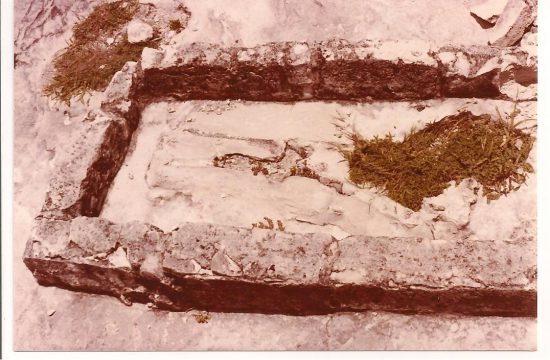 On January 21, 1871, a thousand Yucatecan government troops led by Coronel Daniel Traconis attacked Tulum by surprise, capturing María’s son, and forcing the High Priestess to flee for her life.   Regrouping her troops, Maria counter-attacked on July 3, 1872.   The counter attack was answered by the Yucatecan government almost immediately and from that time on, no word was ever heard from María, who was most likely killed in the battle.