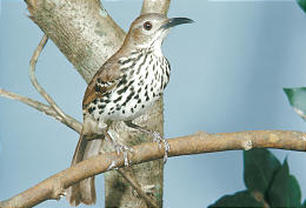 In 1885, Robert Ridgeway described the Cozumel Thrasher (Harporhynchus guttatus) for the first time and then in 1886 published his findings in Description of some new bird species from Cozumel Island, Yucatan in the Proceedings of the Biological Society of Washington 3:2-24.   Locally, the bird is known as el Cuitlacoche de Cozumel.   The bird is very similar to the Long-billed Thrasher (H. longirostris) found on the Yucatan Peninsula but differs from this species genetically and is endemic to the island.

Last sighted at the Cozumel golf course in 2006, the birds have been very rare ever since Hurricane Roxanne hit the island in 1995.   The Cozumel Thrasher may now be extinct.   Since this Thrasher population on Cozumel has survived hurricanes for many centuries, the birds’ depopulation is most likely due to predation by the boa constrictors that were first released on the island in 1971 but had not spread across the entire island until 1991.   (For more information on these snakes and their introduction into the island, see The Boa Constrictors of Cozumel in the Natural History section of this web site.)

The Cozumel Thrasher’s habits are little known and it has been repeatedly described as a difficult bird to follow in the field.   Ludlow Griscom in The ornithological results of the Mason-Spinden expedition to the Yucatan, Part II, Chinchorro Bank and Cozumel Island, in American Museum Novitates 236:1-13, published in 1926 wrote:

“It is a very common bird, but rather shy and secretive, living in the heart of the densest thickets. Here in the dim light, with the ground carpeted with dead leaves, it melts into the background. Your approach is inevitably somewhat noisy, and if hunted in this way, a dark shadow has suddenly ceased to exist about the time you realize you have seen a Cozumel Thrasher running away over the ground. Ensconced in the heart of a thicket, however, squeaking produced excellent results, thanks to the extraordinary bump of curiosity possessed by nearly all the endemic birds of the island. In a few seconds I would be surrounded by Melanoptila, and peering sharply about would finally make out the head and pale yellow eye of a Thrasher or catch a nervous lift of the tail. But I never saw one arrive. It always appeared. The song is sweeter and richer in tone than that of our own Brown Thrasher, but softer and lower. The bird sings concealed in the thickets and the distance of the singer is somewhat difficult to judge. It is a much more frequent and rapid runner than the Brown Thrasher.”

If you see one of these birds, please call the Fundación de Parques y Museos de Cozumel, as they are currently involved in recording all possible sightings.