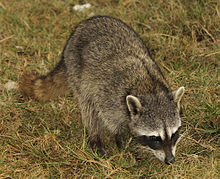 Clinton Hart Merriam first described the Cozumel raccoon as morphologically distinctive from its mainland relative, the common raccoon subspecies Procyon lotor hernandezii, in 1901.   Since then, other scientists have generally agreed with Merriam’s assessment, especially Kristofer Helgen and Don E. Wilson, who have dismissed this classification for the other four island raccoons in their studies in 2003 and 2005.  Therefore, the Cozumel raccoon was listed as the only distinct species of the genus Procyon besides the common raccoon and the crab-eating raccoon in the third edition of Mammal Species of the World.   An archaeological study showed that Maya from Cozumel used raccoons of reduced stature, which suggests that the size reduction of this raccoon is not a recent phenomenon.

No true fossils of the species are known, although skeletons have been found at some archeological sites on the island.   Data from molecular clock studies implies a divergence date from the common raccoon of anything between 26,000 and 69,000 years ago.

Merriam described the Cozumel raccoon as being markedly smaller, both externally and cranially and easy to distinguish from the common raccoon because of its “broad black throat band and golden yellow tail, short posteriorly expanded and rounded nasals and peculiarities of the teeth.”   Its reduced teeth point to a long period of isolation.

Apart from its smaller size and more rounded snout, the Cozumel raccoon is similar in appearance to the common raccoon.   The fur over the upper body is buff-grey ticked with occasional black hairs, while the underparts and legs are pale buff in color.   The top of the head lacks the buff tinge of the rest of the body, and has a grizzled grey coloration, contrasting with the white fur of the muzzle and chin, and with the black “mask” pattern around the eyes.   A line of brownish-grey fur runs down the middle of the snout, joining the “mask” patterns on either side.   The tail is yellowish, with six or seven black or brown rings that become fainter on the underside.  In males, the scruff of the neck has a patch of relatively bright, orange fur.

Adults range from 58 to 82 centimeters (23 to 32 in) in total length, including the 23 to 26 centimeters (9.1 to 10 in) tail, and weigh between 3 to 4 kilograms (6.6 to 8.8 lb).   This represents an example of insular dwarfism, and the animals are, on average, about 18% shorter and 45% lighter than the subspecies of common raccoon found on the local mainland, P. lotor shufeldti.  Cozumel raccoons also exhibit sexual dimorphism, with the males being around 20% heavier than the females.

According to the IUCN Red List, they are considered critically endangered.   In fact, they report that only about 250-300 individuals are left on the planet.   These raccoons are so extremely endangered because of their small geographic range.   They are endemic to Cozumel Island, an island around 478 square kilometers (185 square miles) in area, lying off the east coast of the Yucatan Peninsula in Mexico.   Cozumel Island supports several other carnivores including the dwarf coati (Nasua nelsoni) and dwarf gray fox (Urocyon cinereoargenteus).  Islands usually lack terrestrial mammals, especially carnivores making the pygmy raccoon and the others unique.

On the island, the raccoons inhabit a range of habitats, but are primarily limited to the mangrove forests and sandy wetlands in the northwest tip of the island.   However, they have also been captured in semi-evergreen forests and agricultural lands surrounding these preferred habitats and in the Punta Sur ecological park at the south end of the island.

Relatively little is known about the group size of the raccoons.   They are primarily nocturnal and solitary animals, but may sometimes form family groups possibly consisting of the mother and cubs.   The raccoons live in densities of about 17-27 individuals per square kilometer and inhabit home ranges of around 67 hectares (170 acres) on average.   However, individuals do not appear to defend territories to any great extent, and their close relative, the common raccoon, can exist at very high densities when food is abundant.   Although there have been no detailed studies of their reproductive habits, females seem to give birth primarily between November and January, possibly with a second litter during the summer months. 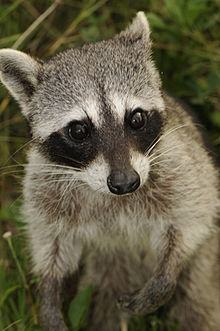 The habitat specificity of pygmy raccoons is in large part due to the type of foods they consume.   Their overall diet consists of crabs, fruit, frogs, lizards, and insects.   They are a generalist omnivore, but crabs make up most of their diet.   In fact, over 50% of their diet is made of crabs.   Their diet is somewhat seasonal.   During the wet season, fruit and vegetation are more abundant and become a large portion of the raccoons’ diet.   Then in the dry season, they begin to consume more of the crabs, insects, lizards, etc.   Being that crabs comprise the majority of the food they eat, this could be the reason their distribution is so limited.   They stay near the water where crabs are abundant.

A large amount of research has been performed to determine whether the pygmy raccoon is indeed a separate species from the common raccoon.  Cuaron et al. (2004) reported that research conducted by many different scholars concludes that they are separate species.   Body size and cranium size have been reported to be smaller in P. pygmaeus, hence the name pygmy.   Other morphological differences include a broad black throat band, golden yellow tail, reduced teeth, and “that these and other characteristics point to a long period of isolation.”

Text is available under the Creative Commons Attribution-ShareAlike License