The Maya culture that built San Gervasio and other Post-classic sites on Cozumel were sea-traders who plied their wares far and wide.   The first recorded mention of their trade routes was in Bartolome de Las Casas’ abstract of the log of Cristóbal Colón (known by Americans as Christopher Columbus), where the discoverer recounted the events of his first voyage to the New World.   In Las Casas’ version of the logbook, it is stated that Colon came across a block of beeswax on the island of Cuba.   At the time of the European discovery of America, the common honeybee (a native of Europe) was unknown in the Yucatan and the only wax-producing bees were the Yucatan sting-less bees (Meliponini beecheii and M. Yucatanica).   Since these bees were kept by beekeepers only in Yucatan, it seems pretty clear someone over here was shipping beeswax to Cuba.

Another possible mention of the Maya and their trading was made by Colón on his last voyage.   Off Bonacca Cay (called Guanaja by Colón) in the Bay Islands of Honduras, he ran across a canoe-load of the traders, plying their wares to the inhabitants of the island.   An account of this event was written by Fernando Colón, Cristóbal Colón’s son who was also on the voyage.   An English translation of this account reads:
“Having come to the island of Guanaja, the Admiral sent ashore his brother Bartholomew, with two boats.   They encountered people who resembled those of the other islands, but had narrower foreheads.  They also saw many pine trees and pieces of earth called cálcide which the Indians use to cast copper; some of the sailors thought it was gold….by good fortune there arrived at that time a canoe long as a galley and eight feet wide, made of a single tree trunk like the other Indian canoes; it was freighted with merchandise from the western regions around New Spain.   Amidships it had a palm-leaf awning like that on Venetian gondolas; this gave complete protection against the rain and waves.   Underneath were women and children, and all the baggage and merchandise.   There were twenty-five paddlers aboard, but they offered no resistance when our boats drew up to them.”
In another account of the event written by the early historian Peter Martir, it was recorded that the large canoe was loaded with trade goods, the “costliest and handsomest” of which were “cotton mantles and sleeveless shirts embroidered and painted in different designs and colors;” long wooden swords edged with “flint [obsidian] knives that cut like steel;” copper hatchets and bells; and a crucible for melting copper.   Martir also noted that they also had with them “...many of the almonds [cacao beans] which the Indians of New Spain use as currency; and these the Indians in the canoe valued greatly, for I noticed that when they were brought aboard with the other goods, and some fell to the floor, all the Indians stooped to pick them up as if they had lost something of great value…”

Physical evidence of these trade routes exists as well:

• A Taino Indian vomit ladle (used to induce vomiting during ritual cleansing ceremonies) was found in a Classic Period grave at Altun Ha, in Belize.   Since the Tainos occupied the Bahamas and the Greater and Lesser Antilles and were not known as traders, one would assume a Maya trader brought the ladle back with him to Belize from a sea voyage to one of those islands.

• A cache of Pre-classic Maya jadeite axes, or celts, was found in the 1990s on the Island of Antigua and traced back to the origin in the Motagua valley in Guatemala (1,800 miles away) by mineralogist George Harlow, of the Museum of Antigua and Barbuda in St. John’s, Antigua.

• A group of Maya pottery shards and obsidian implements were found on the western tip of Cuba by Maurice Ries in the 1940s.

• I personally found a jadeite celt (that originated in Guatemala) on a small islet near a Spanish shipwreck off Highborn Cay, Bahamas, which I was excavating with the Institute of Nautical Archaeology in the 1980s.  It is shown on the right.

First, in our very own Cozumel museum, one can see firsthand the two Olmec objects (a carved jadeite pectoral, and a carved stone pendant) that were excavated in San Gervasio during the 1970s by Jeremy Sabloff and William Rathje’s teams from Harvard and University of Arizona.   Admittedly, it is possible that these items came into Quintana Roo via an unknown overland trade-route, but the sea-trade route that followed the coast all the way from Tabasco to Cozumel makes more sense. 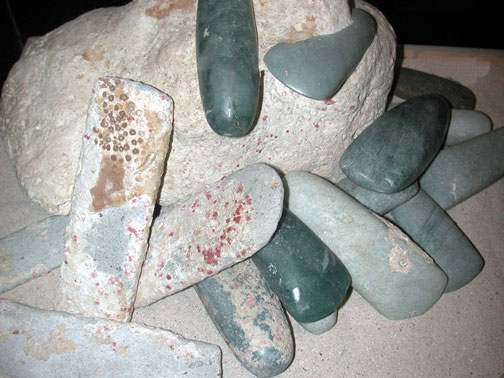 Second, the only two known Maya shipwrecks were both discovered right here on Cozumel.   The first was discovered by Ismay (Mary) Mykolyk (better known in Cozumel as “Maria la Bandida”) at Chen Rio, on the eastern side of the island. While diving, she noticed several jadeite celts and beads in the sand of the ocean floor.   Further investigation lead to the discovery of more embedded in the fabric of the reef.   Through careful excavation of the area, more of the artifacts were found. Some of these are now on display in our Museo de la Isla.

Another Maya canoe wreck-site was discovered near a small ruin on the northeastern side of the island.   This time, it was the result of a hurricane that led to the discovery; the ruin on shore was destroyed, but the storm uncovered the cargo of the wreck just offshore, again jadeite celts and beads.

Whether these canoes turned over as they were leaving Cozumel, or wrecked as they were arriving from the shores of Guatemala with jadeite celts to trans-ship from Cozumel will never be known, but they do offer positive proof that our island was once a port in the Putún Maya trade route