Like the story of Papillon, (the French prisoner played by Steve McQueen in the movie of the same name) who escaped from Devil’s Island, off the shores of the French penal colony of French Guiana, other daring escapes from the Iles du Salut have been attempted during the years the penal colony was in operation (1852 to 1946).   One such story is the account of three different groups of escapees who managed to get away and eventually meet up together on the island of Trinidad.

“I was working in the garden of one of the administration buildings on Royal Island [one of the three islands that make up the Iles du Salut],” wrote Jean Duvernay in 1939, “and had been there for three months when, one day, I was along the beach fishing for shellfish and had the chance to speak with a fisherman from the mainland.   This fisherman had a dugout canoe about seven meters long and about a meter and a half wide.   At this particular time my friends, three of whom were with me on Royal Island, four on St. Joseph Island, and two on Devil’s Island, had turned over to me their savings, telling me they were counting on me to do the necessary.  I had two thousand five hundred francs and offered the fisherman five hundred to remain in the passages between the Islands after dark and later turn over the canoe to us.   One thousand was agreed upon.

I got the word to my friends and it was agreed that we would meet at a certain spot on my island as soon as it got dark.   In spite of the danger of swimming in shark-infested waters between the islands, the bunch gathered as planned.   Soon we were aboard after swimming out to the boat off the shore some little distance, as no boats being allowed close in at night.   In a very short time we had taken the fisherman ashore, gathered together some food and were at sea, realizing that we might be sacrificing our lives for the sake of the liberty we all loved so much.”

Duvernay’s group became lost after a few days because of a defective compass and drifted aimlessly until a British freighter gave them water and provisions and pointed them towards Trinidad, their intended goal.   They arrived in Trinidad a few days later where they met two groups of escapees who had managed to get away from the French Penal Colony as well.   The three groups combined into one for a while on Trinidad, but later decided to split up and reform into three new groups, made up new combinations of the members from each of the three original groups.

The first of the reformed groups (made of nine men) sailed to Colombia, where they were quickly recaptured and returned to French Guiana.

The second of the new re-combined groups, made up of 10 men, set sail for Haiti, but ended up wrecking on Curacao 12 days later.   The people of Curacao gave them a new boat, but when they set sail for Aruba they wrecked their boat on the rocks of the harbor in Curacao just as they were leaving.   The islanders gave them a third boat, which they sailed to Aruba, then onward to Colombia.   In Colombia, this group also splits up; three of the escapees eventually to be arrested and returned to the French penal colony, and the remaining seven of the group managing to continue on.

The third group, managed to find a freighter in Trinidad took them as far as the coast of Quintana Roo.   There, at Punta Herrero, they were given one of the ship’s longboats and put adrift.   This group was made up of Jonas Varennes, Pierre Pouillon, Germain Jolion, Fernando Girial, Jean Goutelle, and Louis Kieffer.   From Punta Herrero, the six escapees hitched a ride on a Mexican Customs ship, which carried them and their small boat to Cozumel on August 15, 1938.   There they sold the boat for $200 and were allowed to settle on the island, where they used the money to start new lives.

A memo filed with the American Consulate General in Mexico City in 1939 appears below and sheds more light on the situation: 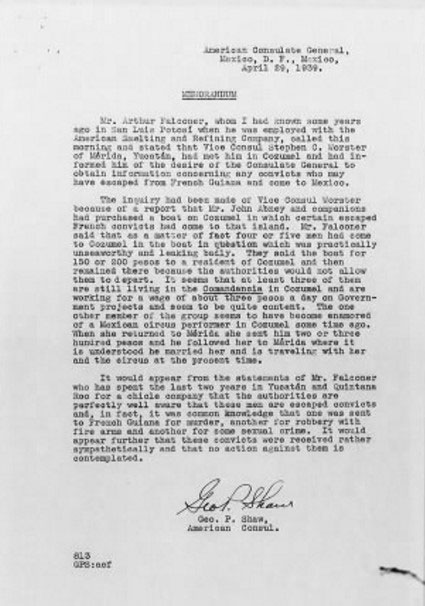