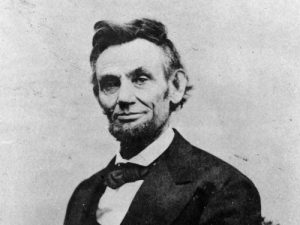 Most Americans were brought up to believe Abraham Lincoln was one of our greatest Presidents. As schoolchildren, we were told his belief in the equality of man led him to free the black slaves through his Emancipation Proclamation in 1862. However, reviewing the transcripts of his public speeches, the memoirs of those he worked with, and the public records, a very different Abe Lincoln comes to life. It would seem that the main reason he wanted to free the nation’s slaves, was to be able to then deport them, preferably back to Africa. Since the 1840s, Lincoln had been a member of the American Colonial Society, a group who, with the help of the US government, were instrumental in setting up colonies along the shore of Sierra Leone in 1820 for the express purposed of receiving deported black freedmen. The colonies were managed by a hodge-podge of missionaries, American government appointed functionaries, and black entrepreneurs. The colonies were not very successful, until most of them banded together in 1838, renaming their capital Monrovia, and their new unified colony Liberia. In 1847 they declared their independence, drawing the wrath of the US government, who refused to recognize the new nation. The ships bringing deportees stopped coming.

On October 15, 1854, in a speech in Peoria, Illinois, Lincoln said: “My first impulse would be to free all the slaves, and send them to Liberia,—to their own native land. But a moment’s reflection would convince me that whatever of high hope (as I think there is) there may be in this, in the long run, its sudden execution is impossible.”
Later, on September 18, 1858, in his fourth debate with Stephen A. Douglas at Charleston, Illinois, Lincoln stated: “I will say then that I am not, nor ever have been in favor of bringing about in any way the social and political equality of the white and black races – that I am not nor ever have been in favor of making voters or jurors of negroes, nor of qualifying them to hold office, nor to intermarry with white people; and I will say in addition to this that there is a physical difference between the white and black races which I believe will forever forbid the two races living together on terms of social and political equality. And inasmuch as they cannot so live, while they do remain together there must be the position of superior and inferior, and I as much as any other man am in favor of having the superior position assigned to the white race.”

In his first annual State of the Union Address, on March 4, 1861, Abraham Lincoln expressed his hope that a foreign territory could be purchased by the US to relocate freed, black slaves. In the address, Lincoln said, “You [blacks] and we [whites] are of different races. This physical difference is a great disadvantage to both of us. Your race is suffering, in my opinion, one of the most grievous injustices inflicted on any people. But, even when you are freed from slavery, you are far from equal with the white race. That is why it is better for both races to be kept separate.”

Since Benito Juarez was on good terms with the US president, Lincoln felt that perhaps Mexico might be able to provide the answer. Word was passed down the chain-of-command to send out feelers. In 1861, Montgomery Blair, the Post Master General and a personal friend of Matias Romero, the Mexican charge d’affaires in Washington at the time, met several times to discuss the matter. Romero later reported that Blair had told him “Cozumel is a deserted island which in no way serves the Mexicans, and the white race could not possibly acclimatize itself on Cozumel or Yucatan, which is inhabited by Indians. These regions are destined to be populated by Negroes. We need to rid ourselves of them, and we could not encounter another place more appropriate to send them than that island.”

After Romero’s meeting with Blair, Secretary of State William Henry Seward (who was later to purchase the Russian Territory of Alaska for the US in 1867) also met with the charge d’affaires to talk further about the possibility of purchasing the island of Cozumel for this purpose. Romero informed him that the purchase would be next to impossible, as the Mexican people would not stand for losing one more single square-inch of sovereign territory, but they would be amenable to taking certain, selected, freed-slaves in as immigrants.

Unaware that the Cozumel purchase was doomed to failure, Senator James Rand Doolittle, head of the Senate’s State Foreign

Relations Committee, introduced a bill to allow the President to go through with a purchase of foreign territory. Doolittle hoped the area chosen would be Cozumel and was instrumental in getting the bill passed, which it did, breezing through the Senate vote. Blair also wanted to see the deal work. He said he wanted to place the black freedmen of the United States “…in the hot lands of Southern Mexico where they could do the agricultural labor for which they were deemed suitable.”

However, as Romero had predicted, the sale of the island to the US was a non-starter, and Lincoln abandoned the Cozumel project.

On May 20, 1862, the American Consul-General in Cuba, Robert Wilson Shufeldt, presented Manuel Doblado, Benito Juarez’ Minister of Foreign Relations, another plan by President Lincoln to send freed, black, American slaves to Mexico. This time the intended colony would be the Isthmus of Tehuantepec, a strip of land that the US had been trying to buy from Mexico since the 1840s in order to build a road and railway across it to join the Atlantic and Pacific. This plan to send the freed blacks to Tehuantepec was rejected by Mexico as well.

In September 1862, Lincoln’s next effort to send black freedmen to a foreign territory began with attempt to send 50,000 of them to colonize land owned by Ambrose W. Thompson in the Chiriquí Province of Panama. Due to the vocal complaints of neighboring countries, the plan was abandoned. That same September, a fourth attempt was made, this time to set up a black colony in Ile a Vache off the coast of Haiti. 500 black freedmen were sent as a first wave, but the project was a miserable failure and the starving colonists had to be rescued by the US military a year later. After that, Lincoln gave up all hope of acquiring a foreign territory for the black freedmen, and refocused his attention on the Civil War.