The practice began in pre-Columbian North America, where wild tobacco was harvested by Indians and smoked in clay or stone pipes, as well as to be used to produce smoke for use in a clyster, or enema.  Later, the Indians subjected their horses to these tobacco-smoke enemas as well as each other, as this illustration from the 1700s shows: 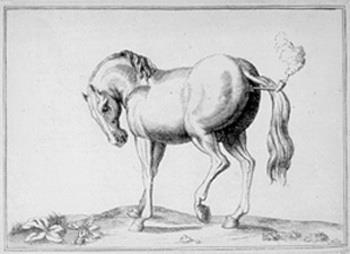 The early English settlers of New England adopted this bizarre practice and it crossed the seas to Europe, where the action blowing tobacco smoke up the anus of a drowning victim was believed to help revive them.

The following comes from the 1746 book A Physical Dissertation on Drowning. It is the account is of a woman who fell out of a boat which was crossing the river Seine in Passy, France. With the help of their child, her husband went back and found the woman and brought her back to shore:

“Whilst some of the Spectators of this melancholy Accident were advising to hang her by the Heels; and others ordering different Measures to be taken, a Soldier with his Pipe in his Mouth, came to ask the Reason of such a Concourse of People; upon being inform’d of the Accident, he desir’d the disconsolate Husband to give over weeping, because his Wife would return to Life very soon. Then giving his Pipe to the Husband, he bid him introduce the small End of it into the Anus, put a Piece of Paper perforated with a large Number of Holes upon its Mouth, and thro’ that blow the Smoke of the Tobacco into her Intestines, as strongly as he possibly could. Accordingly at the fifth Blast, a considerable rumbling in the Woman’s Abdomen was heard, upon which she discharg’d some Water from her Mouth and in a Moment after return’d to Life.”

Whether or not the smoke was what revived her, the practice caught on and doctors began recommending this practice of “blowing smoke” as a way of bringing drowned people back to life, as well as treating colic and gas pains.

In Collection of Cookery and Medical Receipts, written between 1685 and 1725, a treatise on the back of folio 64 addresses the treatment of the aliments “winde & collick”:

“And so is tobacco given in A pipe [when] it is well Lighted the small end to be oyled and put up into ye fundament and some body put the great end into their Mouth and blow the smoake up into the body this never fails to give ease to the winde collick you may put A small Glister pipe into the body and put the small end of the pipe Tobacco in the End of ye Glister pipe this way will Convey the Smoak into ye body very well.”

In Doctor Nicholas Culpeper’s book, Culpeper’s Family Physician; or Medical Herbal Enlarged. Vol. 2 (London, 1782), he added that the smoke seemed to work as an effective way to get rid of roundworms as well and included an illustration of the smoke clyster apparatus: 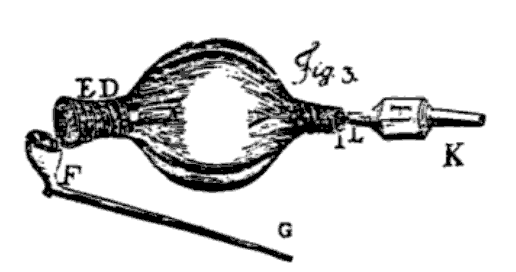 Another 18th century booklet showed the application of a tobacco-smoke clyster to a drowned man: 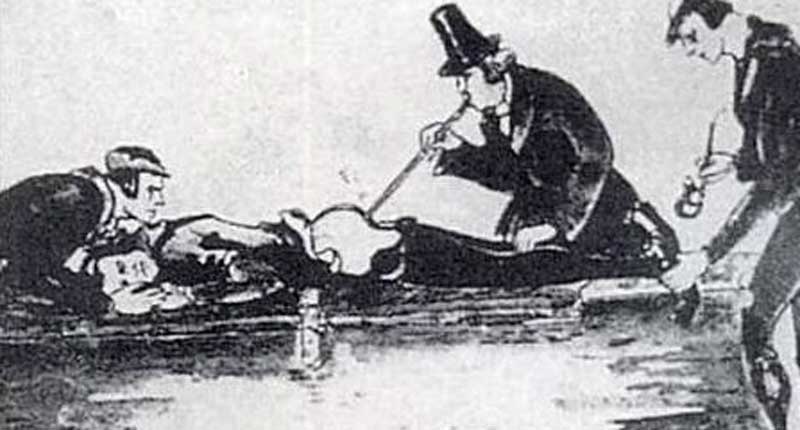 In 1774, William Hawes and Thom¬as Cogan, two doctors who practiced medicine in London, formed The Institution for Affording Immediate Relief to Persons Apparently Dead From Drowning. Later, this catchy name was changed to the Royal Humane Society. The society promoted the resuscitation of drowning people by paying four guineas to anyone who was able to successfully revive a drowning victim. The society advocated the use of tobacco clyster for this purpose, and one of its members, Dr. Houlston, published a rhyme to help promote its use:

Tobacco glister (clyster), breathe and bleed.
Keep warm and rub till you succeed.
And spare no pains for what you do;
May one day be repaid to you. 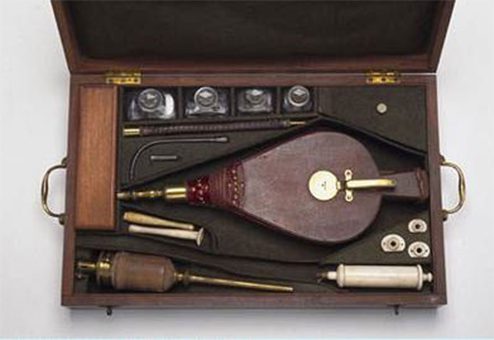 Tobacco smoke clyster kits (like the one above) were produce by the society and distributed to its members. These kits were produced in large quantities, and by 1802, the society had blown smoke up almost 900 drowning victims’ rear ends with “successful” outcomes.

A similar society was also started in Amsterdam. That society also published a treatise on the process, which included a drawing of the clyster tools: 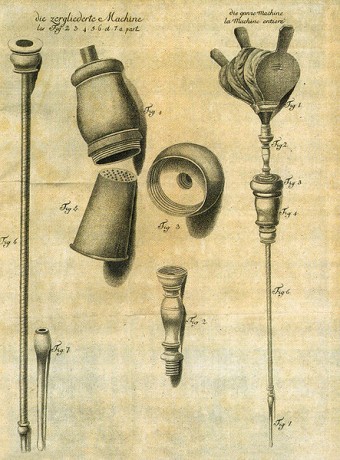 Another Dutch booklet showed how to use the equipment and a third illustrated the process being applied to an unconscious woman at the edge of a lake:

Over the years, the tobacco-smoke clyster kits became ubiquitous in Europe: 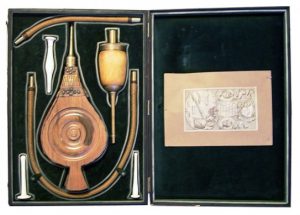 But, by the turn of the 19th century, the effectiveness of tobacco-smoke clysters began to be questioned. By the 1900s, they had fallen out of favor.

That’s the true story of this bizarre practice.

And, believe me, I’m not blowing smoke!